How to deal with Passive DB server attacks? No plaintext in database at all.

However, the query set is not always known in advance. So we need to dynamically adjust a layer of SQL-aware encryption scheme for queries at runtime. Onions of encryption: different keys for different layers of onions. The proxy will not give all keys to the server at any time.

keys for each layer are calculated by

MK is the proxy’s Master Key and only intended for a single principal (user).

At this time, we can defend against Threat 1 (passive DB server attacks) by not exposing any plaintext to the DBMS server while most SQL queries can still be supported.

3.2 Solution to Threat 2 and Challenge 2

How to deal with any attacks on all servers while still retaining data-sharing among users? The proxy’s Master Key (MK) is not adequate for multi-users. The solution is to chain encryption keys to user passwords with the specification of key access policy among users.

A principal is an entity such as a user or a group, over which it is natural to specify an access policy. 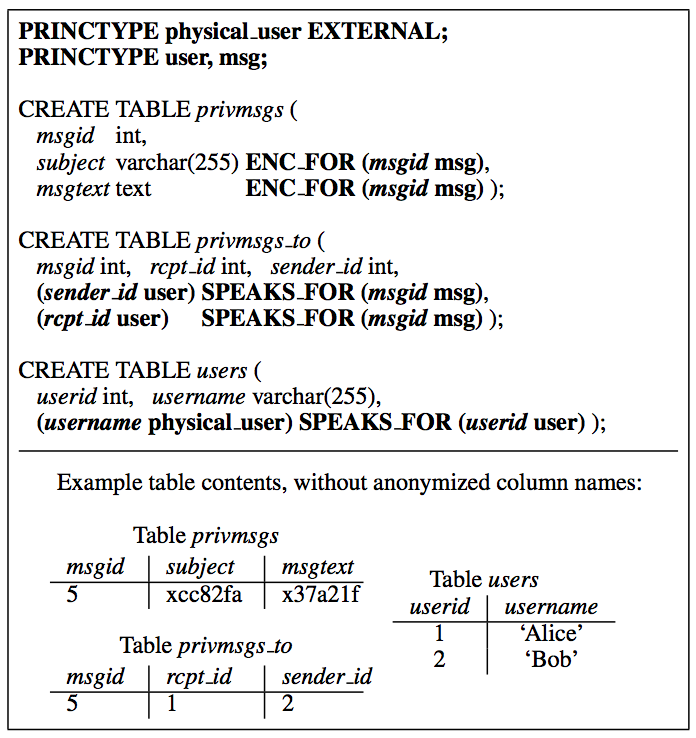 At this time, threat 2 is successfully conquered while the data-sharing feature is retained.